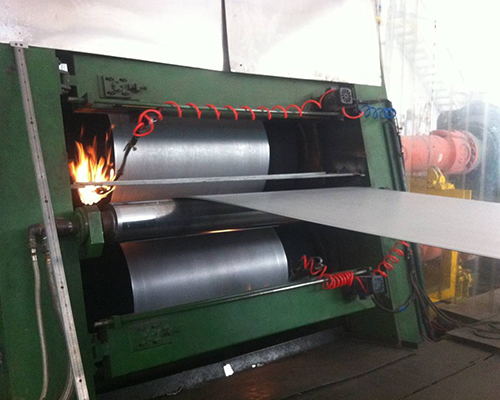 The existence of this defect makes the cast-rolling strips continuously subjected to tensile and compressive stresses in the subsequent production process, and the cracked edges continue to expand. In particular, the original large cracked edges spread rapidly during cold rolling, and reaching a certain extent will cause strip breakage, interrupt production.

In addition, too large cracks cannot be completely cut off, which not only affects the subsequent processing and user use, but also increases the cost. Therefore, it is an urgent problem for production technicians, such as excessive cracking and avoiding the occurrence of cracks during the casting and rolling production process.

According to the casting-rolling principle, in the casting-rolling zone, the liquid metal is cooled by two rotating rolls, and the two processes of casting and rolling are completed in a short time. There is no relative sliding between the surface of the metal and the surface of the roll, and the rolled piece becomes thinner, and there is only a large back sliding in the center.

When the shear force generated by deformation exceeds the shear strength of the solidified hard-shell metal, the weak part of the material cracks first and then expands. After the stress here is fully relaxed, the crack no longer expands, thus forming a crack.

In the deformation zone, the metal is simultaneously subjected to the friction force applied from the castertip ears and the tensile stress applied to both sides. These two stresses in opposite directions cause cracks to occur preferentially at the edges.

According to the principle of casting and rolling, aluminum foundry can minimize the cracks by reducing the amount of deformation or reducing the friction of the castertip ears.