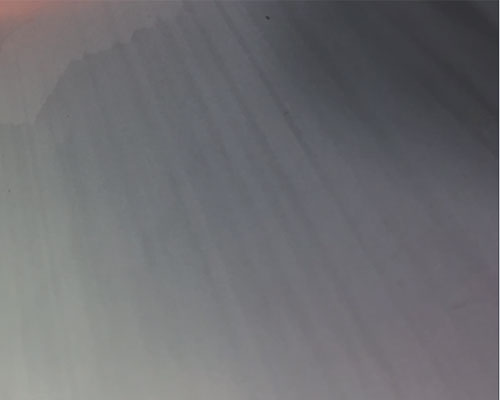 Carbon gray streak is a kind of surface segregation phenomenon, the difference in deformation and plasticity of segregated parts after rolling. The stripes on the surface are regularly arranged, and the pattern is black after being etched by high-concentration acid, with no obvious changes in the grain structure. This kind of streaks often appear in the production of alloys, and most of them are on the lower surface and edges of the strip.

(1) The liquid cavity becomes deeper when the casting-rolling zone is too long. The slab is not easy to form when it is just out of the slab, and it is subjected to the rolling force to form a shearing force. The temperature of the newly crystallized metal layer in the inner deformation zone is relatively high, and there is no resistance behind the liquid cavity. When the shearing force exceeds the rigidly solidified metal When the shear strength is high, the low-strength intergranular is easy to pull apart, deform, and produce post-slip. The high-component alloy first flows in and fills, each forming a large amount of eutectic structure, causing segregation.

(3) If necessary, use the method of breaking the strip to break the oxide film at the front of the casting nozzle and eliminate the carbon gray streaks. Broken belt processing has certain risks. It is required that the liquid level of the launder and the front box should be as low as possible to be consistent, and the minimum speed of the rolling mill is controlled just right to have obvious effects.