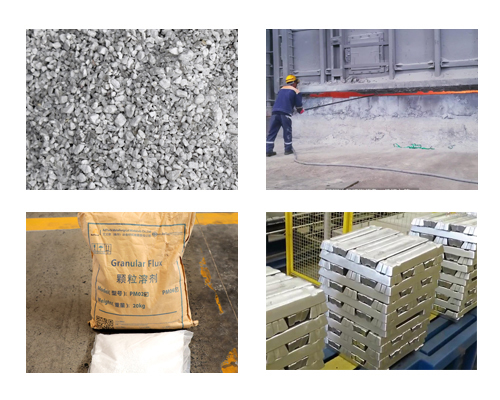 The cast house flux is mainly a mixture of chloride and fluoride salts and other additives. Most fluxes are based on KCl and NaCl, and another common ingredient is NaF.

Commonly used covering agents contain 47.5% KCl, 47.5% NaCl and 5% NaF. For the covering agent, to improve its fluidity, its melting point should be lower. Other covering agents are based on MgCl, KCl, or carnallite. These covering agents have good fluidity and can form a thin layer on the surface of the molten aluminum. However, since MgCl is very expensive, it is generally used in sodium-free fluxes. This flux is used for alloys containing more than 2% Mg, or for removing calcium in aluminum alloys with high magnesium content.

Alkali metal fluoride is a surfactant, which can reduce the surface tension between the cast house flux and the metal. Compared with alkali metal fluoride, the surface cleanliness of AIF3, MgF2 and chloride is relatively poor. This is because when using the fluoride salt flux containing NaP and KP, the aluminum liquid can easily absorb some sodium and potassium, and sodium and potassium are surface active elements.

Alkali metal fluorides can dissolve oxides in a small amount, which helps to penetrate the oxide film on the surface of the scum, thereby improving the wettability, helping to separate oxide inclusions from the aluminum liquid and aluminum from the scum. However, the melting point of alkali metal fluoride is generally higher, which limits its application, and the use of fluoride salt brings stricter environmental protection requirements than pure chlorine salt. Fluoride salt flux is commonly used cryolite (Na3AIF6), calcium fluoride (CaF2) or sodium fluorosilicate (Na2SiF6), and the total content is generally within 20%.

Oxygen compounds such as NaNO3 and KNO3 added in the flux react with aluminum to form Al2O3 and release a lot of heat. This can locally improve the fluidity, thereby increasing the actual yield of aluminum. In the furnace cleaning agent, these exothermic reactions can accelerate the penetration of the flux into the furnace debris.