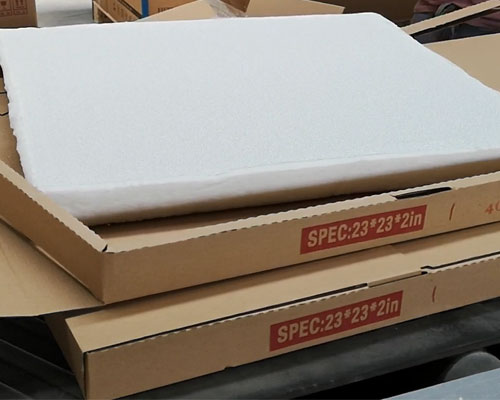 The main purpose of using ceramic foam filters for aluminium is for removing inclusions in the molten aluminium. Inclusions usually exist in the melt in three forms: metal oxides; foreign matter such as refractory chips; particles introduced during melt processing.

When the particle density and diameter are large, natural sedimentation usually occurs, and the static sedimentation of particles smaller than 90 pm is not very effective. The bubbles or molten flux generated in the traditional degassing or flux refining treatment process will cause the inclusion particles to float to the surface of the melt. In most cases, this mechanism can effectively remove inclusions above 30um. Filtration refers to the process in which the molten metal flows through densely packed spheres, glass fiber fabrics, metal meshes, foam ceramic filters, or other porous media to separate inclusions from the melt. The advantage of ceramic foam filters for aluminium is that it can remove inclusion particles whose diameter is much smaller than the through-hole.

When the aluminum alloy melt is not filtered, a large number of inclusions will increase the viscosity of the aluminum alloy liquid and reduce the fluidity; during the solidification process, it is easy to block the feed channel between the dendrites, forming microscopic shrinkage and pores.

At the same time, these impurity spots will also adsorb bubbles, form pores in the sample, become a source of microcracks, and reduce the performance of the alloy.