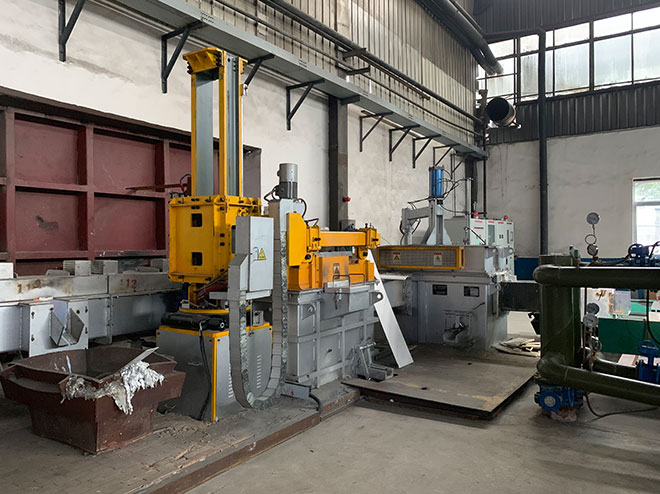 After passing through the refractory filter, the molten metal is transferred to a second or fluxing stage wherein a series of vertically arranged baffles direct the molten metal flow in countercurrent relation to a pair of spaced diffuser heads from which is dispersed a fluxing gas. Thereafter, the molten metal is directed through a third or adsorption stage which comprises a series of parallelly arranged horizontal plates formed of a refractory material having an adsorptive affinity for one or more of the impurities known or expected to be present in the molten metal. Minute particles of such impurities adhere to the surfaces of the adsorptive plates and are thereby removed from the molten aluminum.

From the adsorption stage, the molten metal is subjected to a fourth or final purification treatment by filtration through a filter medium formed of rigid, porous refractory material disposed immediately upstream of the treatment system outlet to the tundish of the continuous casting machine. The porous filter is designed in such manner as to provide a surface area substantially greater than the total cross-sectional area of the flow path and, preferably, at least twice as great.

The degassing filtering equipment is particularly advantageous in that the plural purification stages insure that the occurrences of inclusions and voids caused by particulate matter and entrapped gases in the continuously cast product are minimized.