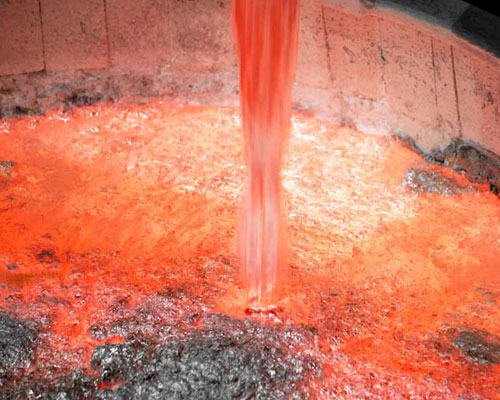 (3) Fe Si content is high. In the electrolysis process, the oxide impurities of elements with positive potentials, such as SiO2, Fe2O3, etc., are easily reduced, while the reduced impurity elements such as Fe and Si directly enter the aluminum liquid, which reduces the aluminum grade. They mainly come from raw alumina, carbon anodes and operating tools. Especially when domestic alumina is used as the raw material, the Si content in alumina is generally higher than that of imported alumina due to the type of ore and desilication technology in China. Usually the aluminum liquid contains (Si) 0.8%-10%, (Fe ) 0.9%~1.1%.

4) High hydrogen content. Due to the particularity of the palladium electrolysis process, it is inevitable that the molten aluminum contains gas. The main component of the gas is hydrogen, about 70% to 90%, and a small amount of CO, CO2, N2 and CH4. The radon produced by the thermal decomposition of the anode hydrocarbons is electrochemically dissolved on the anode. After the generated H migrates to the cathode, it is discharged on the cathode to generate hydrogen. In addition, the hydrogen in the surrounding environment is reduced by the water vapor from the aluminum to dissolve in the aluminum. In liquid, the saturated content of hydrogen in liquid aluminum increases with the increase of temperature. For example, it is 0.67mL/100gAl at 660℃, 1.23mL/100gAl at 750℃, and 2.15m/100gAl at 850℃. It is 2.9m/100gAl at 950℃ and 3.9mL/100gAl at 1000℃. AdTech offers online degassing unit for hydrogen removal. (5) High Na content. During the electrolysis process, on the one hand, aluminum replaces Na from cryolite (NaAF6), sodium fluoride (NaF) and other media. On the other hand, because the activity of Na in the melt is higher than that of Al, there is Na at the cathode. The precipitation enters the aluminum liquid, so that the content of the aluminum liquid reaches (Na) 0.011%-0.05%.