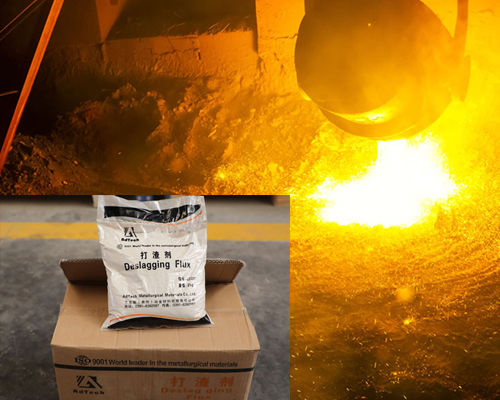 Hydrogen, found in the foundry primarily due to the decomposition of water vapor, is very soluble in liquid aluminum alloys, but much less so in the solid phase. When aluminum solidifies, the excess dissolved hydrogen comes out of solution and forms bubbles, from pinhole size to much larger sizes. The metal which has not been degassed before casting is vulnerable to this type of defect.

Aluminum is chemically very active. A tough film or skin of aluminum oxide forms quickly on all freshly exposed surfaces, especially in the molten state. Scrap or ingot additions to the melt, stirring and agitation cause aluminum oxide to be suspended in the melt. If these oxides are included in the cast product, they may lead to defects, so they must be removed from the melt. Most oxides are of aluminum, but alloying elements such as magnesium, iron, copper and titanium also can form their oxides.

Cleaning fluxes are necessary to remove oxides from the melt, while cover fluxes act as a barrier for the surface of the melt against oxide formation.

The UAE Global Aluminum Corporation (EGA) has completed the expansion of the Al Taweelah smelter in Abu Dhabi to increase the facility’s annual production capacity by 78,000 tons.

EGA CEO Abdulnasser bin Kalban said: “As the world recovers better from Covid-19, the completion of this expansion project has increased our production capacity in the face of strong demand for aluminum. The expansion project is below budget. And delivered as planned.”

“All 2,843 electrolyzers of EGA use our own high-efficiency technology developed in the UAE. This is an important source of competitive advantage and our pride as a global leader in the aluminum industry.”

Mubadala Investment Company, Abu Dhabi’s Strategic Investment Division and Dubai Investment Corporation are the co-owners of EGA. However, in the first half of 2021, the company sold 1.18 million tons of aluminum to customers in more than 50 countries, and in 2020 it sold 2.52 million tons.

As the global economy tried to rebound to the pre-pandemic stage, demand for aluminum soared, pushing the price to reach and exceed US$3,000 per ton, but it calmed down to US$2,555 per ton on November 5, 2021.

EGA stated: “The expansion of the Al Taweelah smelter was completed in three phases using the company’s own technology. It commissioned the first phase in April and the second phase in July.”

“Since the 1990s, EGA has used its own technology in every expansion of its smelter and has transformed all of its old production lines,” it added.