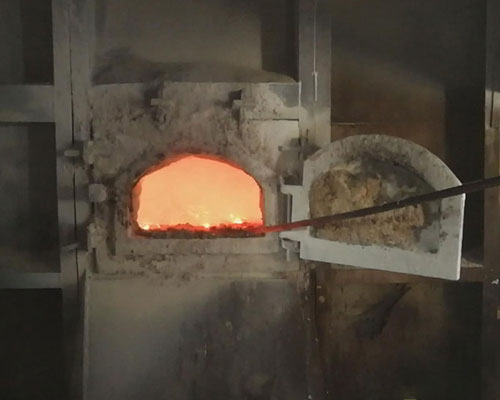 In order to respond to performance requirements in the fields of electrical components, electrical components, automobiles, and textiles in the field of using aluminum alloy products, it is preferable to set the amount of H2 in the molten Al. The content of silicon ingot is 0.25cc/100gAl or less, and the content of oxide inclusions such as alumina (Al2O3), magnesium oxide (MgO), spinel (composite oxide of Mg and Al) is set to 200 ppm or less. The amount of the above three types of oxides Al2O3, MgO and spinel is greater than the amount of other oxides in molten Al. The measurement of the content of the three oxides is easier than the measurement of other oxides. Therefore, the amount of oxide inclusions refers to the total amount of the three oxides Al2O3, MgO and spinel.

The aluminum flux is injected into the molten Al, spraying it onto the surface of the melt. The injection method is the same as that of conventional refined flux. In order to improve efficiency, it is preferable to inject fluxes powder into molten Al from a nozzle or spray gun, inserted into molten Al together with an inert gas as a carrier such as N2 or Ar gas.

The inert gas (such as N2 or argon) and the carrier of the fluxes foam the melt, thereby promoting the refining effect of alum and the floating of slag inside the melt. Inert gases play such an important role. Of course, in order to enhance the foaming effect of the melt, it is allowed to inject inert gas through a spray gun or a spray gun different from that used for the carrier during or after the injection of the flux. In addition to this injection, flux can be sprayed onto the surface of the melt. In short, a preferred method for improving the refining effect can be appropriately selected.