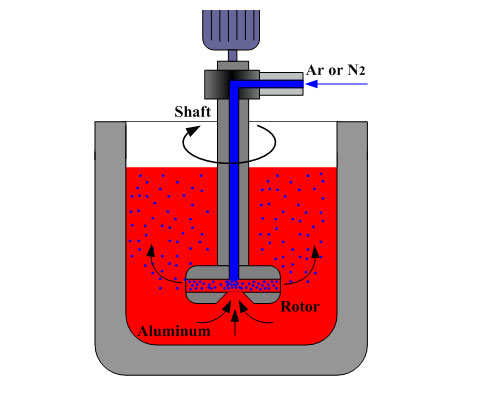 Inert gas metal refining is a refining method in which inert gas is continuously blown into the aluminum melt, and oxidized impurities and hydrogen are brought out of the liquid surface during the floating process of the bubbles.

The hydrogen entering the bubble escapes into the atmosphere as the bubble floats up. In addition, during the floating process of the bubbles, the macro-molecular hydrogen bubbles suspended in the melt and the gas in the inclusions can also be brought out of the liquid surface by flotation, thereby achieving the purpose of degassing.

The reason for inert gas metal refining is that the blown inert gas bubbles can absorb the oxidized inclusions in the melt and bring them out of the liquid surface during the floating process. This method is the so-called flotation slag removal method.