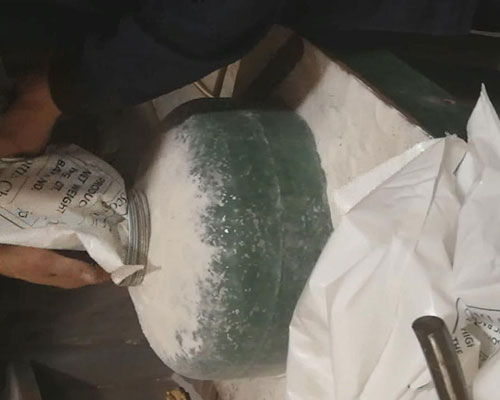 Hydrogen is the only gas that can be dissolved in aluminum melt in large amounts. Hydrogen accounts for more than 80% of the gas dissolved in the aluminum melt, and the solubility of hydrogen in solid aluminum is much lower than that in liquid aluminum. During the solidification of the melt, the solubility of hydrogen in the melt decreases as the temperature decreases. Therefore, after the aluminum material is solidified, only about 5% of the hydrogen in the liquid aluminum still exists in the solid aluminum, and the remaining 95% of the hydrogen will be precipitated from the aluminum and form molecular hydrogen, and then in the solidified aluminum. Defects such as pinholes or pores are formed.

Adding a proper amount of refining fluxes into the aluminum and aluminum alloy melts can significantly reduce the pinhole rate and porosity of the obtained castings. The molten aluminum degassing effect with fluxes mainly has the following two aspects:

(1) The flux component has a greater affinity with hydrogen, and can absorb and dissolve hydrogen in a large amount. The flux components and hydrogen generate stable high melting point compounds, which reduces the dissolved hydrogen content in the melt, and significantly reduces the hydrogen content and pinhole rate of aluminum, while the high melting point flux compounds are eliminated in the form of slag.

(2) It is impossible for hydrogen bubbles to nucleate homogeneously in aluminum and aluminum alloys, and can only pass through heterogeneous nucleation. The core of the nucleation can be the solid particles in the melt, the mold wall, the front of the solid-liquid interface, and the initial phase. After adding the flux in the melt, due to its extremely active chemical properties, it can react with the Al2O3 inclusions in the melt to reduce the inclusion content or change the morphology of the inclusions. Moreover, the flux also has a metamorphic effect on some primary phases of the melt during the solidification process. The primary phase changes from coarse strips to fine spheres, which greatly reduces the nucleation core of bubbles in the melt, thereby reducing Pores in aluminum and aluminum alloy castings.