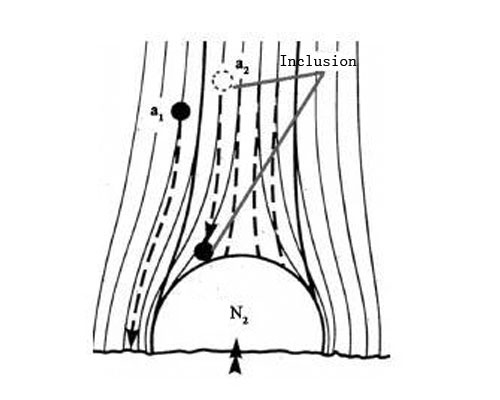 Effectively removing inclusions is one of the main tasks of the aluminum smelting process. Inclusions aggregate and grow, and rely on buoyancy to float up and adhere to the inner wall of the metallurgical container, or be captured and carried away by floating bubbles, which is the main way to remove them. By blowing gas (mostly N2) into the molten aluminum, the flow state of the molten aluminum can be changed, which is conducive to the homogenization of the temperature and composition of the molten aluminum, and the small bubbles generated can capture the inclusion particles and drive the inclusions to float up. It is conducive to the production of pure aluminum.

The process of removing inclusions by bubble wake can be broken down into the following three processes: The difference in the mechanism of action of the two removal methods should lie in:

In the actual process, the flow of molten aluminum in the metallurgical container is very complicated, and the bubbles will not remove the inclusions in a specific way.