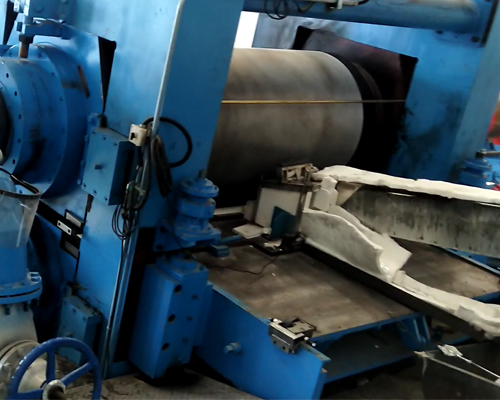 The preferred alloys for manufacturing disk materials are 5082, 5086, and 5182. Facts have proved that these alloys are particularly difficult to continuously cast with consistently high quality. Appropriate technology has not been developed to produce disc stocks of these materials. Only a narrow, pilot-scale metal volume was produced. Even so, the method still relies on strict control of alloy chemistry, which is difficult to achieve under production conditions. Intermetallic segregation is still a problem, because the largest particles still have enough size to protrude from the surface or leave voids, which in either case will destroy the formation of the anode and the magnetic film during the electrochemical treatment.

Most importantly, the existing aluminum alloy continuous casting technology for these alloys does not produce a completely uniform surface structure in the cast strip. Fluctuations in the casting process can cause unevenness, which leads to uneven appearance of ripples on the surface. The heterogeneity in the cast plate may require high temperature annealing treatment to improve its effect. Although it is particularly troublesome when making computer disks, when aluminum alloy is used for other purposes, the appearance of ripples on the surface of the aluminum alloy is also very troublesome. In many alloys where the alloying elements in aluminum exceed about 2%, ripple appears to be a problem. 1000 series forged aluminum materials are not usually considered a problem. These forged aluminum materials are actually commercial pure aluminum with 99% or more aluminum.

It was surprisingly found that when casting aluminum alloys, ripples can be avoided, and the output of the casting machine can be increased considerably.