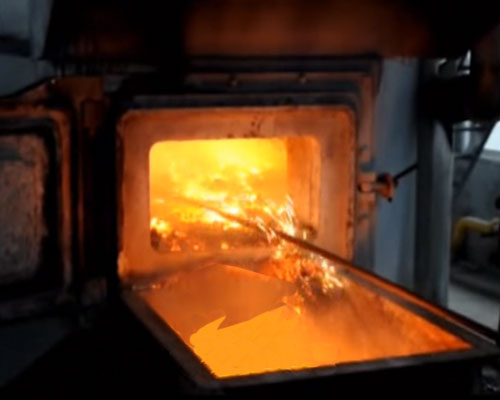 The aluminum alloy melt degassing can eliminate undesirable hydrogen and inclusions before casting. As a result of the shortened holding time of the blended melts, the tendency for the alloy melt to oxidize is minimized, and the volatility of the reactive melt is effectively reduced. In this way, oxidation of the melt is minimized not only as a result of the short holding time of the alloy augmented melt prior to solidification in ingot casting, but also through the utilization of protective atmospheres. Moreover, hydrogen absorption, which results in undesirable porosity in the ingot, is minimized concurrent with reduced oxidation.

It is known that molten aluminum and aluminum-based alloys absorb large amounts of gas, and the amount found in a particular melt depends on the characteristics of the metal used (whether it is a primary metal or a secondary metal), the composition of the alloy, and the melting conditions. The influence of the gas in the metal is manifested in the casting by the appearance of pores and so-called pinhole pores, as well as the appearance of strips or bubbles on the surface of the forging. If the finished product is used as a liquid or gas container, these chambers, especially pinhole-type chambers, may cause gas or liquid leakage. When in a molten state, aluminum and its alloys can absorb gas, but when the liquid metal cools and solidifies in the mold, the absorption of gas decreases, resulting in the release of free gas. The released gas immediately accumulates and forms bubbles, and some of the bubbles are trapped in the frozen block, resulting in the formation of cavities or discontinuities in the metal structure, which is the source of weak castings. AdTech offers two methods specifically designed to eliminate the harmful effects of gases and insoluble oxides in aluminum and its alloys. One is is to use a refining flux, where the metal is melted and added to the furnace. The other to provide aluminum alloy melt degassing device for purifying a large amount of molten metal in an economical and effective manner. The purpose is to degas the metal so as not to damage its solid casting quality or physical properties, and to eliminate voids in the casting due to gas release.

Solvents must be carefully removed from the metal entering the mold, and they are likely to form a crust on the wall of the metal container, which must be shaved off from time to time. In some cases, the solvent may corrode the container, thereby weakening it, and may introduce impurities into the molten metal pool.

The online degassing system passes inert gas or active gas through the channel of molten metal. The degassing effect is better.