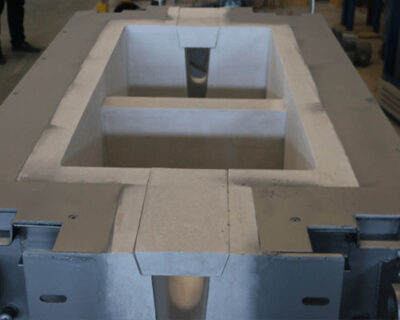 During the melting and casting of aluminum, bubbles, oxide films, and non-metallic inclusions disrupt the continuity of the metal structure. It will cause stress concentration, lower the performance of the casting, and reduce the processing performance. In order to avoid these hazards, it needs the help of the Ceramic Filter Box. AdTech aluminum liquid filter box is an aluminum industry special aluminum silicate filter box. Usually, the foam ceramic filter box consists of a steel shell, and aluminum silicate liner. The molten aluminum flows into the aluminum liquid filter tank, and the ceramic foam filter captures the inclusions.

Rectification. After the turbulent molten metal passes through the filter, it becomes a smooth laminar flow state, which prevents the molten metal from entraining gas, reduces the erosion of the molten metal on the cavity, and exerts the slag blocking function of the gating system to avoid secondary oxidation slag.

Mechanical screening. There are a large number of large impurities such as oxide inclusions and slag in the molten metal. A large amount of inclusions can be screened out by selecting a foam ceramic filter with a suitable pore size.

Adsorption mechanism. The ceramic foam filter has a large specific surface area, which is conducive to the adsorption of a large number of fine impurities. This adsorption is mainly the physical adsorption of intermolecular gravity.