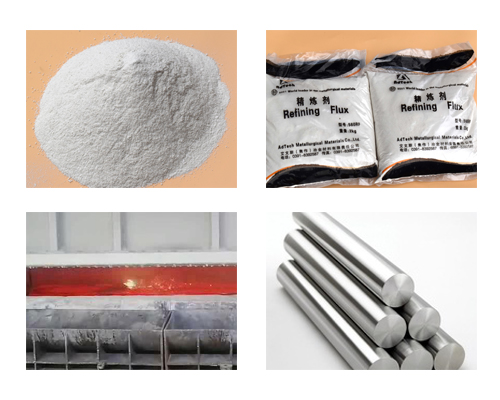 The cover flux prevents oxidation of the molten aluminum by providing a physical barrier. Cover flux will reduce the rate of hydrogen absorption from the reaction between aluminum and H2O formed by the combustion of hydrogen-containing fuel. The covering flux is based on MgCl2-KCl and forms a low melting point eutectic at 424°C. These covering fluxes have high fluidity and form a thin layer on the surface of the melt. Because MgCl2 is expensive, it is mainly used to treat aluminum alloys with extremely low Na and Ca content and magnesium content exceeding 2 wt%

The salt flux plays an important role in the processing of molten aluminum. They can passively prevent metal oxidation, and sometimes they can also actively remove inclusions and alkali metals. Salt fluxes can also be used to improve metal recovery from scum and in the melting process of recovered waste.

Aluminum Casting Flux can perform various functions, such as degassing, removing Li, Na, Ca, and Mg, removing inclusions, cleaning, and alloying. In addition, flux can also be used to minimize oxidation and promote metal/oxide separation, thereby increasing recovery rates. Several common fluxes are based on the mixture of KCl and NaCl, a low-temperature (665 °C) eutectic is formed to improve the fluidity of the flux.

The oxide can be removed from the molten aluminum by treating the flux. Flux is based on fluoride capable of binding oxides. The interfacial tension between metal oxides is significantly higher than the interfacial tension between oxides and fluorides. Then, the fluoride and the oxide form a mixed phase, because their low-energy state fluoride sticks to the oxide and covers them, aluminum separates from these mixed phases.

The flux encapsulates the oxide and fluoride, and then forms a mixed oxide phase. This leads to decomposition into individual oxide fragments. These fragmented oxide mixed phases have the ability to float because their density is much lower than that of molten aluminum. This results in slag with low metal content.