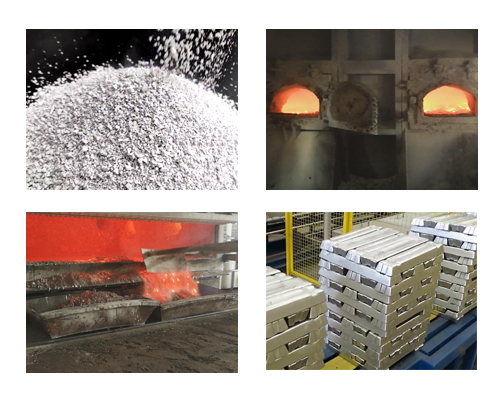 Aluminium Degassing Flux for foundry can remove inclusions or gaseous contaminants in the molten metal with inert or reactive gases.

Solid fluxes, such as powders, flakes, or granules, are usually composed of chlorides and fluorides and additional additives to impart special properties.

Most fluxes are based on a mixture of KCl and NaCl salts, forming a low temperature (665 ºС) eutectic. Another common component of flux is sodium fluoride NaF, which forms a ternary eutectic with KCl and NaCl m.p. 607 degrees Celsius. Common coating flux contains about 47.5% NaCl, 47.5% KCl and 5% fluoride salt. The low melting temperature is important, so it increases the flowability of the flux.

Certain compounds decompose as they emit gases, such as chlorine or carbon dioxide. If such fluxes enter below the surface of the melt, they will form bubbles, thereby reducing the hydrogen content in the melt. The most famous of these compounds is hexachloroethane (C2Cl6), which partitions gaseous compounds of chlorine Cl2 and AlCl3.

Alkali metal fluoride salts have the ability to dissolve oxides (although to a very small extent), which helps them penetrate into the oxide film in the slag and grow on the furnace wall. This leads to improved wettability, which promotes the separation of oxide inclusions from the melt and aluminum metal from dross.

Nitrate additives, such as KNO3, can cause heat to be released. These fluxes are exothermic. The oxygen released from the decomposition of nitrate reacts with metallic aluminum to form Al2O3 and a large amount of heat. This locally increases the turnover rate and promotes the separation from the metal oxide. Flux, used to clean the oven, this reaction increases the growth of flux penetrating the furnace wall.