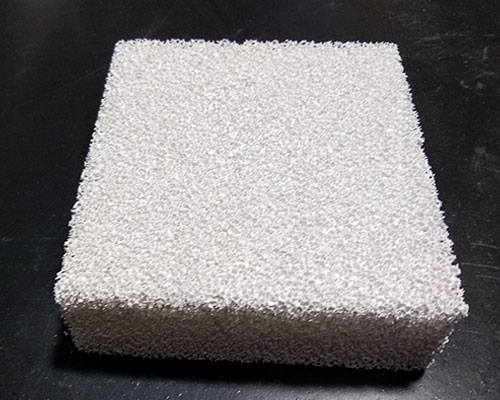 1. Screening. Following the traditional filtration mechanism of glass fiber mesh, like a sieve, it prevents the inclusion of particles and their agglomerates whose size is larger than the pore size of the filter surface.

3. Deep bed filtration. Inside the ceramic foam filter, the path that the melt flows through is winding, and there is even cross-flow reversal in a small local area. After correctly designing and placing the ceramic foam filter in the gating system, the resistance of the metal liquid flow increases, and the liquid metal is full of the gating system, giving full play to the slag blocking function of the gating system. At the same time, the liquid flow injected from the sprue is throttled by the filter, and the molten metal stays in the sprue for a short time, and the slag with low density floats and separates, which can produce the advantages of the bottom injection gating system. When the molten metal continues to be poured through the ceramic foam filter, the slag with a small surface density floats up, and on the other hand, it effectively reduces or eliminates the eddy current.

The filter is placed in the cross runner or inner runner of the cavity, and when the first liquid stream reaches the surface of the inlet end of the filter during pouring, the phenomenon of adsorption between the liquid stream and the foam net frame occurs. This kind of adsorption is mainly based on non-selective multi-layer physical adsorption, and the inclusions are adsorbed layer by layer in the filter frame until it is blocked.

The above three filtration and purification mechanism theories cannot explain some phenomena, such as metal mesh filtration. The purification principle is generally explained as mechanical interception (screening), but by pouring molten steel and molten iron on the molybdenum wire mesh and stainless steel mesh, the metal The experiment in which the liquid completely passed through the filter screen found that there were no inclusions intercepted by the machine on the filter screen. According to the experimental analysis based on the principle of fluid mechanics, due to the twists and turns in the flow channel of the ceramic foam filter, its ability to rectify the liquid metal from turbulent to laminar flow is very strong.

Due to the rectification of the filter, the molten metal, which originally had a strong turbulent flow, becomes laminar when passing through the filter. After it flows through the filter, it needs to go through a longer transition zone to restore the original turbulent state. In this transition zone, the liquid flow is too late to develop into turbulence or smaller turbulence, avoiding metal secondary oxidation.