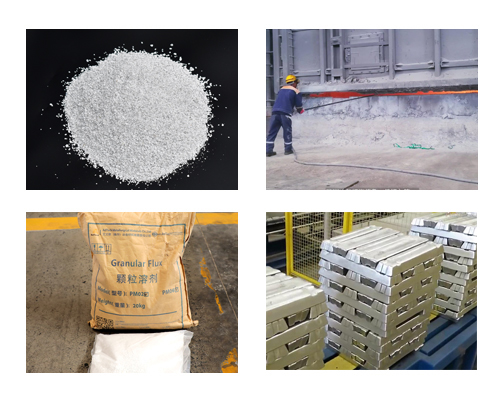 Foundries refining flux is based on the molten salt mixture, usually used for the processing of molten aluminum. It is used to passively protect metals from oxidation and sometimes to remove additive elements as impurities from molten aluminum. Flux is mainly a mixture of chloride and fluoride salts and additives. Most fluxes are based on a mixture of NaCl and KCl.

Foundries refining flux is mainly used for reducing the content of hydrogen and inclusions. Dissolved hydrogen is one of the most common impurities in molten aluminum and is very unpopular. Hydrogen becomes a problem because it is insoluble in solid aluminum. Dissolved hydrogen in molten aluminum will dissolve during solidification and cause pores in the material. Inclusions can be described as non-metallic solid particles suspended in the melt. The amount of such particles depends largely on the quality and cleanliness of the waste. Other sources of inclusions may be refractories in the furnace.

The main tasks of the refining agent also include: protecting the melt from further oxidation by covering, dissolving, or suspending dirt, oxides, and other non-metallic particles. Salt compound droplets act as bubbles and suspend inclusions to the surface by flotation. Since the speed of flux droplets rising to the surface is much smaller than that of bubbles, a certain stabilization time is required. There are many kinds of foundries refining fluxes used for aluminum alloy smelting, which can be divided into two categories: covering agent and refining agent.

1. The melting point should be lower than the melting point temperature of aluminum alloy.
2. The specific gravity should be less than that of aluminum alloy.
3. It can absorb and dissolve the inclusions in the melt, and can remove the gas in the melt.
4. It should not be chemically active with metal and furnace lining. If it interacts with metal, it should only generate inert gas that is insoluble in metal, and the flux should be insoluble in molten metal.
5. Low moisture absorption and low evaporation pressure.
6. It should not contain or produce harmful impurities and gases.
7. It should have proper viscosity and fluidity.
8. Easy to manufacture: cheap price.