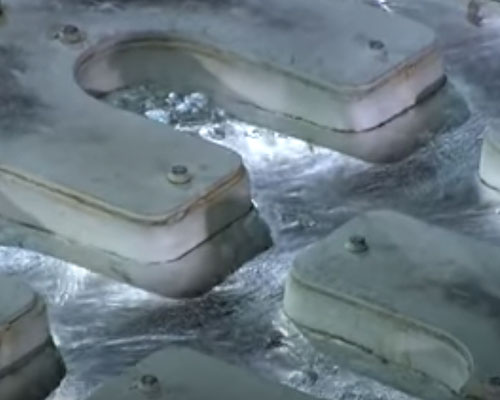 1) Solid non-metallic inclusions, mainly including oxides, carbides, nitrides and a small amount of CasO4cas, etc. 80% of them are oxide inclusions such as Al2O3MgO and Malo existing in film and granular form. Such inclusions and melt density are not different Large, large specific surface area, irregular shape, easy to adsorb gas and suspended in the melt, so it is difficult to remove. Among them, the existence form of alumina is the most complicated, including more than ten kinds of amorphous, a-A1O3, BA1O3, etc.In the process of melt processing, high-temperature thermite reaction easily forms granular alumina inclusions, including carbides and nitrogen The aluminum oxide film on the surface of the melt enters the melt and forms fragmented inclusions. The refractory materials on the surface of the furnace and smelting tools enter the melt to form oxide inclusions such as SiO2 and Zr2O. The existence of a small amount of fine inclusions in aluminum melt can reduce the degree of crystal undercooling and promote nucleation to a certain extent. Some particles can also enhance the second phase of the aluminum alloy, and most of the inclusions. Existence will only adversely affect the fatigue resistance, ductility, plasticity, corrosion resistance, and anodic oxidation properties of ingots or products. The existence of solid inclusions increases the viscosity of the aluminum melt, affects the fluidity and casting performance of the aluminum alloy, and forms loose defects. At the same time, it provides a core for the initiation of cracks, destroys the continuity of the matrix, causes stress concentration, and deteriorates the parts. The mechanical properties of the product cause early failure of the product. Inclusion particles are also easy to form hard spots, which deteriorate the processing performance and surface finish of aluminum alloy, and increase the loss of processing tools. Liquid inclusions in the melt will cause droplets to accumulate, resulting in poor melt fluidity, forming a conducting tube, etc.