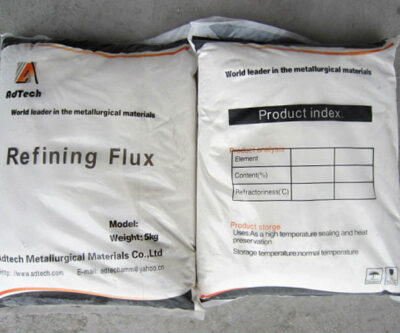 Calculated according to the concentration of potassium ferrocyanide 10ppm in NaCl, one ton of flux contains 12000mg of highly toxic KCN, and 200mg of KCN can be fatal; the decomposition of organic matter in the anti-blocking agent of KCl is the main cause of pungent odor. In the process of refining agent development, physical and chemical methods should be used to remove the anti-caking agent in the chloride salt, which reduces the impact of the smelting operation on the workers and the damage to the environment from the source.

①The harm of fluoride to the environment

The impact of fluoride on the environment is mainly reflected in vegetation. The leaves and roots of various plants can absorb fluoride. Generally speaking, the accumulation and distribution law of fluoride in plants is: leaf>stem>root. Because the fluoride in leaves is rarely transported outwards, its accumulation is positively correlated with leaf age; from different leaf positions, the distribution characteristics of fluoride are: base> top> middle and upper part. There are obvious differences in the absorption and accumulation of fluorine by different plants. For example, tea plants, the bioaccumulation efficiency of fluorine in leaves is very high, which is 1000 times that of soil soluble fluorine and 2-7 times of total soil fluorine; 97% of fluorine is accumulated in leaves, while only 3% in other parts. ②The harm of fluoride to the human body

Harm to teeth: Hou Tiezhou et al. reported that fluoride may inhibit the proliferation and differentiation of tooth germ cells by inhibiting the normal expression of CyclinD1 and PCNA, thereby affecting subsequent matrix synthesis and secretion, causing tooth germ development and mineralization defects, air fluorine pollution and drinking Tea with high fluoride content is the reason for the high incidence of dental fluorosis in the population. Fluoride can also inhibit the expression of Smad 1 and Smad 5 in human tooth germ inner enamel epithelial cells cultured in vitro, suggesting that fluoride may interfere with the normal bone morphogenetic protein (BMP) between epithelium and mesenchyme by inhibiting Smad 1 and Smad 5 molecules. Signal transduction, which affects the differentiation and development of enamel, may be one of the intracellular mechanisms of dental fluorosis.

Hazard to the nervous system: 10% of patients with skeletal fluorosis have nerve damage. Fluorine can enter the brain tissue through the blood-brain barrier, accumulate in the brain tissue, and produce toxic effects on the brain tissue. Long-term excessive intake of fluoride can cause demyelination changes in the cerebral cortex and subcortical areas of animals. This may be one of the reasons for the decline of the intelligence level of children in the high-fluoride area and a series of neurological diseases in the ward population. Patients with endemic fluorosis may exhibit central nervous system disorders such as memory loss, emotional instability, headaches, and ataxia. These symptoms suggest that fluorosis may have a direct toxic effect on the central nervous system.
In addition, the effective components of conventional fluxes contain a lot of C2Cl6 and Na2SiF6, etc. Na2SiF6 will decompose and release SiF4 toxic gas at high temperature. Although C2Cl6 has a good degassing effect, it will release C12 toxic gas, which is very toxic and harmful to the human body. , Will cause serious harm to the environment and equipment, and chlorine is the most fundamental culprit that destroys the atmospheric ozone layer. At the same time, such fluxes tend to cause smoke during use, which is detrimental to field operators. Therefore, the conventional flux treatment process not only has limited purification effect, but also causes serious environmental pollution.

In recent years, some factories have adopted non-toxic refining agents based on nitrates. The following reactions occur in the non-toxic refining agents in the aluminum melt: 4NaNO3 + 5C = 2NaCO3 + 2N2↑ + 3CO2↑. N2 and CO2 are insoluble in molten aluminum and play a refining role when floating. In the refining agent, Na3AlF6 and Na2SlF6 play both a refining role and a buffering role. N2 and CO2 are non-irritating and improve working conditions. However, the reaction of nitrate in the melt will release a large amount of heat, which will easily cause local overheating of the melt, increase the melt loss, and increase the melt inclusion content.

This shows that the development of environmentally friendly molten aluminium casting flux is an inevitable trend. AdTech refining agent uses the principle of liquid metal compound to develop and configure products to reduce smoke, reduce burn damage, and environmental protection and economy.