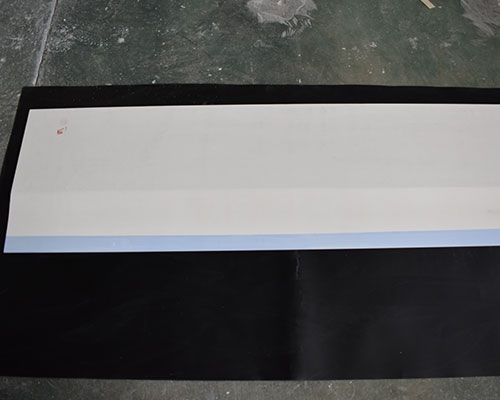 By combining a pair of elongated feed nozzle components with a non-corrosive cushion, a molten metal feed nozzle for a continuous roll casting machine is made. The feed port nozzle members are spaced a sufficient distance apart to allow molten metal to pass through the downstream edge to engage the surface of the continuous casting roll. A cushion is fixed to the outer surface of each feed tip nozzle member along the downstream edge. The cushion includes at least one outer surface that is less aggressive than the material forming the feed nozzle member to minimize the scraping of the roller. The upstream portion of the cushion pad contains a material that expands when heated, so that the outside of the pad fits the surface of the adjacent roller. After the metal has solidified, when the metal passes and is compressed to conform to the thickness defined by the narrowest gap between the casting rolls, these scratches embedded in the casting rolls are applied to the metal again. The end result is the production of a continuous metal sheet with scratches, which is usually represented by raised ridges that extend above the expected thickness of the metal sheet, which is defined by the narrowest gap between the casters determine.

Currently, the only way to eliminate the scratches transferred to the metal plate during the die casting process is to use a feed nozzle with little or no bend. It can resist the absorption of water; and has the heat and strength characteristics required for the successful casting of non-ferrous metals.