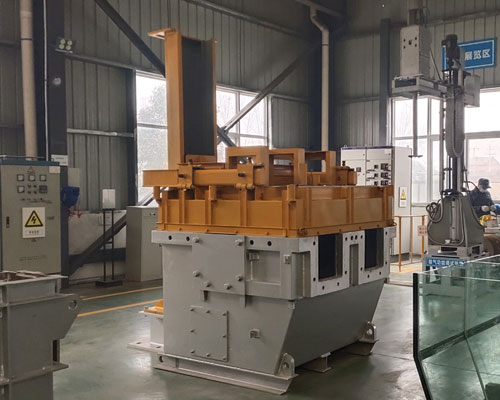 Online degassing molten metal is usually accomplished by blowing in inert gas containing a certain percentage of chlorine (Cl2) gas. Chlorine forms small bubbles in molten metal. Degassing is usually carried out in a continuous operation before casting, which itself can be carried out continuously. A mixture of inert gas and Cl2 (chlorine) is injected into the molten metal to treat the molten metal as it flows from the furnace to the pouring pit. Although only inert gas can effectively remove dissolved H2 (hydrogen) through mass transfer, it is necessary to remove alkali metal and alkaline earth metal impurities (such as sodium (Na), lithium (Li), and calcium (Ca)) in molten metal chemical reactants, such as Cl2.

However, the use of gaseous Cl 2 represents environmental and industrial hygiene issues. Gaseous chlorine is also a source of regulated air emissions. In addition, due to the dangers of Cl2, the requirements for storage, piping, safety and training may also be strict. In addition, Cl2 will increase the corrosion and wear of other equipment in the factory. Therefore, it may be desirable to remove alkali metals and alkaline earth metals from molten aluminum and its alloys on-line without using Cl2.

In order to achieve effective degassing, all degassing equipment must deliver a certain amount of minimum gas per kilogram of metal. Online degassing molten metal can be carried out in a trough or deep box degasser. In the trough-shaped degasser, the residence time of the metal in the area where the gas is supplied is much less than that in the deep box degasser. Each rotary ejector must deliver a high amount of gas and has a suitable delivery capacity. The amount of gas determines the effectiveness of the ejector design. It has been noted that in a trough-shaped degasser with a gas rotor, the gas rotor can deliver an appropriate amount of gas to the molten metal, and the gas tends to be released from the rotor in an irregular manner, resulting in the surface of the molten metal Splash and inefficiency. Some trough degassers use several relatively small rotary gas ejectors along the length of the trough section to achieve the effect of a continuous or pseudo “plug” flow reactor, rather than a fully mixed flow reactor or continuous stirring Tank reactor, this is the feature of deep box degasser. In an ideal plug flow reactor, there is no mixing, and the fluid elements leave in the same order they arrive.

However, a trough-like degasser with multiple small rotary gas ejectors cannot deliver a large amount of gas in the form of fine bubbles into the molten metal without obvious gas flow irregularities, so it is not suitable for applications where fine bubbles are required. The form of large-scale gas delivery. When chlorine is used as a degassing agent, a deep box degasser is more effective than a trough degasser to remove hydrogen and inclusions from molten metal. When salt flux is used instead of chlorine, the same result can be expected. Therefore, a deep box type degasser must be used to reduce splashing on the surface of molten metal and maximize the removal efficiency of dissolved gases and inclusions.