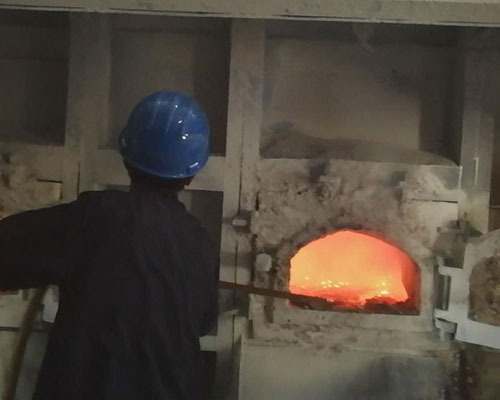 The refining metals by refining gas efficiently removes dissolved gases and other non-metallic impurities from metals in a continuous process with high metal throughput.

Molten metal contains many impurities prior to casting, if not removed, can result in high scrap losses during casting or poor metal quality in products made from it. The main harmful impurities are dissolved gases and suspended non-metallic particles such as metal oxides and refractory particles.

It is realized by the method of removing dissolved gases and non-metallic impurities from molten metal. Include the following steps:

1. Send the molten metal to the refining zone;

2. Maintain the protective atmosphere above the molten metal surface at positive pressure relative to ambient pressure, thereby preventing air and moisture from entering the area and contacting the molten metal;

3. Introducing the refining flux in the form of discrete bubbles into the molten metal below the melt surface; 5. Extracting waste refining gas and dissolved gas released by metal, while collecting and separating other non-metallic impurities in the slag layer on the surface of molten metal;

6. The refined molten metal is withdrawn from the refining zone.

A common feature of these refining gases is that they are inert to the molten metal being refined. Argon and nitrogen or mixtures thereof are preferred, although other noble gases of the periodic table are suitable for use in the present invention. Other useful refining gases are hydrogen and carbon monoxide or mixtures of them with each other or noble gases in the periodic table. It should be noted that hydrogen and carbon monoxide can be used in situations that do not react with the molten metal but will react with gaseous impurities such as oxygen. Other reactive gases with similar properties can also be used, such as sulfur hexafluoride, chlorine, and halogenated hydrocarbons. The selection of a particular refining gas is generally based on the characteristics of the particular metal being refined.