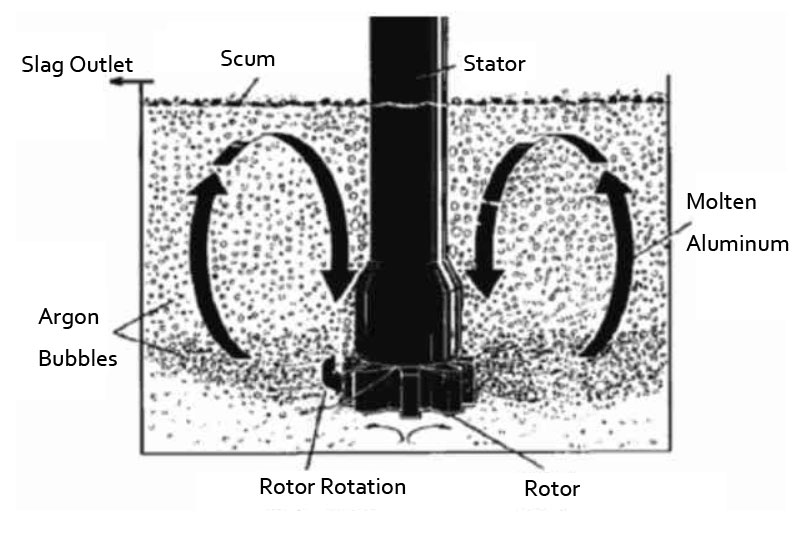 The traditional bubble floatation method of degassing purification technology, such as single tube blowing method and multi-hole blowing head method can only meet certain conditions, and it is difficult to meet the above requirements at the same time. Although the multi-hole blow head method can produce smaller bubbles than the single-tube blow method, it does not improve much. Because the bubbles rise vertically during degassing in these two methods, if the air supply is increased, the liquid surface directly above the nozzle will be obviously raised by the effect of the bubble rise, causing the molten aluminum to churn and splash. Therefore, they cannot play the role of the main factor of air flow. At present, the principle of a rotating nozzle, which has been paid more and more attention by people, satisfies the degassing dynamic conditions of bubble floatation method. The difference between it and the previous purification is that the purification gas is introduced from the shaft hole or the gap between the shaft and the sleeve, and is broken when flowing through the lower rotating nozzle blade and sprayed out at high speed. Then, the rotating molten aluminum rises to the liquid level. The bubble is broken by the action of the liquid ejected from the blade, and moves away from the nozzle at the same time. Its displacement is related to the speed and the shape of the blade. When the speed is high, the head becomes larger accordingly. The longer the radial movement of the bubble becomes, the more diffuse the bubble distribution becomes. When the rotation speed is low, the bubbles gather near the nozzle, which increases the tendency of the bubbles. When the rotation speed is high, the bubbles diffuse. The distribution is more uniform. As the speed increases, the scope of the action of the liquid ejected from the blades is expanded, so that the bubble breaking process can be continued.