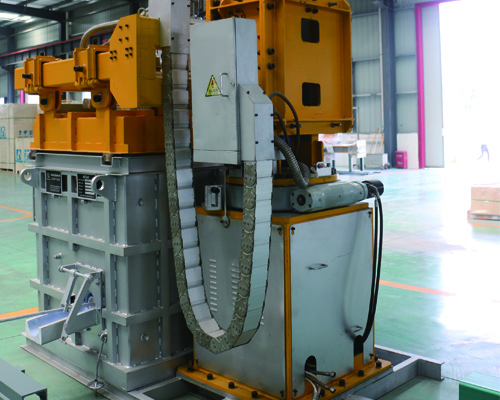 The aluminum liquid degassing device achieves the purpose of stable operation by changing the rotor power transmission mode, making it possible for the rotor to run at a high speed. At present, it is generally 300 to 450 rpm, with a maximum of 600 rpm. After changing to the bottom transmission, the length of the transmission shaft is shortened, and the length of the rotating shaft is shortened, and the rigidity of the transmission shaft is increased, and the swing of the turntable is reduced, so that the maximum speed can reach 900rpm and run stably. The degassing efficiency is also further improved, which can reach 65% and above from the conventional 50%.

It is easy to modify the degassing device of the existing structure. Only the rotor and the turntable need to be placed at the bottom of the degassing box lining, and the rest of the parts do not need to be changed, the modification cost is low, and it is provided for the upgrading of degassing equipment.

The aluminum liquid degassing device includes a box body, a box cover covering the box body, and a rotor. The rotor extends into the box body through the bottom of the box body. The upper end of the rotor is coaxially connected with a turntable, and the interior of the rotor and the turntable are hollow and communicated. Among them, the shape of the turntable is from the traditional disc-shaped structure to the streamlined round head structure. The streamlined round head structure consists of two parts, a cylindrical shape, and a truncated cone shape. The air outlet is ringed on the side of the cylindrical part, and two groups are arranged in the box. The rotor and the turntable can change the traditional nearly straight upward flow into multiple spiral upward air flows, so that the fine bubbles are more evenly dispersed in the molten aluminum, thereby improving the degassing effect.

Experimental verification proves that the bubbles generated by the turntable are small and evenly distributed, and achieve the most efficient degassing and slag removal effects. The material of the turntable is graphite, and oxidation-resistant silicon carbide or silicon carbide + silicon nitride material can be considered in the later period. The speed of the rotating turntable is variable by a variable frequency speed-regulating motor, and the speed is adjustable within 0-900rpm to meet the needs of the process.