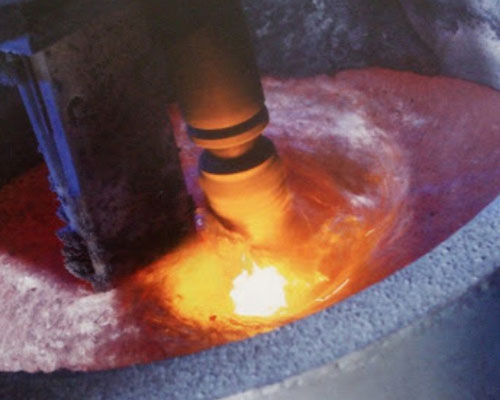 The basic degassing method is the floatation method. The principle is to pass gas or gas-generating substances into the aluminum melt to generate bubbles. According to the principle of partial pressure difference, the hydrogen dissolved in the aluminum melt is under the action of the pressure difference. Continue to diffuse into the bubble, when the bubble rises to the liquid surface, the hydrogen diffused into the bubble enters the atmosphere with the bubble. At the same time, the bubble surface can automatically adsorb inclusions, and the inclusions float up to the liquid surface to form slag.

As the first process of aluminum processing, if the billet has inherent defects (such as inclusions, etc.) caused by melting, no matter what advanced technology or equipment, it cannot be used in a series of subsequent processing processes (such as rolling, Extrusion, heat treatment, surface treatment, etc.) to make up for this congenital defect, and then it is difficult to ensure the quality and performance of aluminum products. Therefore, in order to give full play to the potential of the material and give full play to its own performance, the production and quality control of the cast slab must first be solved.

The main source of hydrogen in the aluminum alloy melt is that during the melting of the aluminum alloy, the moisture in the atmosphere and on the surface of the raw material enters the alloy melt through metallurgical reactions, causing the melt to absorb hydrogen. There are two forms of its existence in molten aluminum. About 90% of the hydrogen is dissolved in the melt as interstitial atoms. About 10% of a small amount of hydrogen is adsorbed in the form of bubbles on the surface or gaps of the inclusions, forming hydrogen bubbles with a negative radius of curvature.

The presence of hydrogen will adversely affect the performance of aluminum alloys. The hydrogen in aluminum and its alloys will produce pores of varying sizes in the casting billet, destroy the continuity of the metal material, and reduce the effective cross-section of the component. The stress concentration around the pores will greatly reduce the processing performance of the cast billet; in the semi-finished products, there will be delamination defects caused by hydrogen and the second type of hydrogen embrittlement, which will increase the brittleness of the alloy during forging and rolling. The hydrogen in the supersaturated state and the combined state is an important reason for the secondary porosity and surface blistering of the cast slab during the homogenization process. AdTech offers online degassing system for aluminum melt, the degassing unit adopts the floatation degassing method. The inert gas is injected into the melt through the rotor and broken into uniformly dispersed tiny bubbles by the rotor. The tiny bubbles rise to the surface of the melt, and the hydrogen and impurities are absorbed during the rising process of the tiny bubbles.