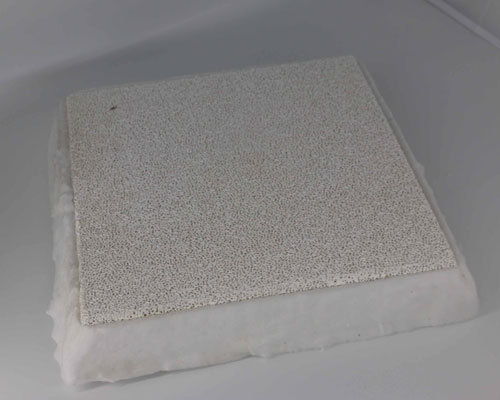 Inclusions filtration is a method of purifying the melt with various rigid media or liquid flux media, and it is the last purification process close to the melting and casting terminal. Previously, after standing in the furnace, gas refining four-flux refining, etc., although 60% to 80% of the inclusions and gas have been removed, the melt is still dispersed and distributed with finer “miscellaneous-hydrogen” particles. In the process of refining, grain refinement and flow, new secondary inclusions will be produced. Before casting, these fine impurities must be gathered and separated. Compared with other purification methods, the ceramic foam filter filtration method has become the first choice for terminal impurity removal because of its low energy consumption, simple operation, low labor intensity, high impurity removal efficiency and less secondary pollution.

Strictly speaking, the inclusions contained in the aluminum melt should also include gas, mainly hydrogen. There is a parasitic relationship between inclusions and gas. Inclusions are the nucleation core of gas and adsorb the gas. When the content of solid fine inclusions is high, there are more gas (pin) holes inside the alloy after solidification, which adsorbs the inclusions and melt of the gas. The wet porosity becomes worse, and it is easy to be suspended in the melt, which increases the difficulty of removal, and can cause defects such as pinholes, looseness, and cracks in the product. The presence of inclusions is a key limiting factor for the difficulty of gas removal. Regarding the control range of the inclusion size, different products have different sensitivities. Small inclusions are not easily captured due to the continuous movement of the solidified interface, so they are very likely to become the base of bubble nucleation, and the inclusion of 10-20μm may bring about the quality of castings. Catastrophic impact, with the increasing requirements for thinner and lighter castings, the requirements for the size of inclusions have become increasingly strict. For aerospace aluminum alloy components, it is generally considered that inclusions above 3-5 μm are harmful. The content of inclusions in the aluminum melt without any treatment is about 0.0050.02 vo%. If the average size of the inclusions is 40 μm, then The inclusion concentration of 1 ppm also means that about 110 particles are contained in 1 kg of melt. The content of harmful inclusions should generally be controlled on the order of several pm.

Removal of harmful inclusions, continuous improvement of the purity of aluminum melt, and minimization of internal and external defects of products are issues that the aluminum industry continues to heat up. Its importance is not only limited to aluminum used in high-end industries such as aviation, aerospace, electronics, packaging, and automobiles, but also attracts high attention in expanding the utilization of recycled aluminum. With the continuous increase in the proportion of recycled waste materials, the sources and types of inclusions in the melt are complex, and the difficulty of removal has increased. Inclusions filtration has become the most difficult problem facing the production of high-end aluminum from recycled aluminum.