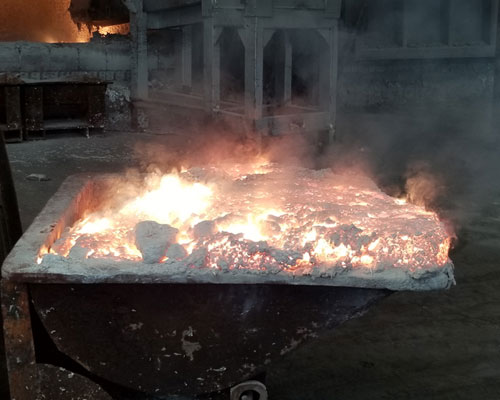 Compared with flux purification, gas purification mainly relies on blowing active or inert gas into the melt. In addition to the use of gas partial pressure law to achieve the purpose of degassing and the purpose of bubble adsorption and inclusion, the active gas can also be combined with melting The hydrogen in the body directly reacts to produce gaseous products to achieve diffusion and degassing, flotation and slag removal. Compared with other purification methods in the purification furnace, the flux method and gas refining method have a series of advantages such as small investment, low cost, strong operability, and significant purification effect, and are currently widely used refining methods. However, gas purification also has some problems, such as the purity of the gas, the size and uniformity of the bubbles blown into the melt. At the same time, reactive gases are often toxic (such as chlorine) and corrode equipment. Inert gas refining mainly relies on diffusion and degassing, flotation and slag removal to achieve purification. Although it overcomes the shortcomings of active gas corrosion equipment, its purification efficiency is far lower than that of active gas, and it cannot achieve the removal of alkali metals and alkaline earth metals.

It is worth mentioning that in addition to the physical and chemical adsorption, dissolution and combination of the flux with the inclusions in the melt, the flux can also decompose or react with the melt to generate various gases, resulting in gas purification. . Different from gas adsorption inclusions, the flux in the molten state can also wet the inclusions, and the kinetic process of adsorption is more effective. This mechanism is more efficient than the gas floatation method for adsorption of inclusions, and can also polymerize inclusions of different sizes. Therefore, more gas-flux mixed refining is used in production, while the advantages of flux and gas are used, and multiple purification mechanisms are combined to achieve efficient purification.