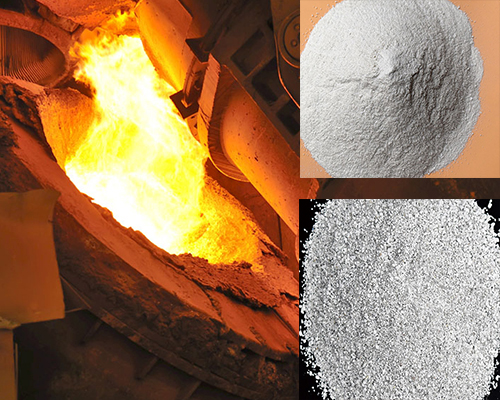 The Flux for Aluminum Recycling Plant is a white powder or granular flux. After drying with a variety of inorganic salts, it is prepared by mixing in a certain ratio.

Some components in the refining flux are easily decomposed at high temperature, and the generated gas is easy to react with hydrogen, and has strong adsorption force with slag and quickly escapes from the melt. The other components have a slag-removing agent effect.

The content of aluminum in the earth’s crust is second only to oxygen and silicon, ranking third, and is the most abundant metal element in the earth’s crust. The development of three important industries of aviation, construction and automobile requires that the material properties have the unique properties of aluminum and its alloys, which is greatly beneficial to the production and application of this new metal aluminum. The application is extremely extensive. The new recycling plant built by Altech Recycling LLC in North Little Rock, Arkansas, will produce recycled materials for new Toyota vehicles. The plant is valued at 20 million U.S. dollars and started operations in September. Three and a half years ago, the St. Louis-based Alter Trading Company (a scrap metal company) acquired eight factories of the Tenenbaum Recycling Group in Arkansas and it was established.

The plant purchases recycled materials from the car shredder facilities in North Little Rock and Rogers. Jack Grundfest, president of Alter Trading Corporation and former head of Tenenbaum, said that the shredding process produces a range of materials. The metal mixture called zorba arrives at the factory, which separates the lighter aluminum, a product called twitch.

Twitch will then be melted into alloys in a furnace in Birmingham, which will be used to produce gearbox housings, engine blocks and auto parts in Toyota products.

Arkansas Governor Asa Hutchinson stated that the new plant is part of the state’s greater effort to achieve a greater share of the auto manufacturing industry.