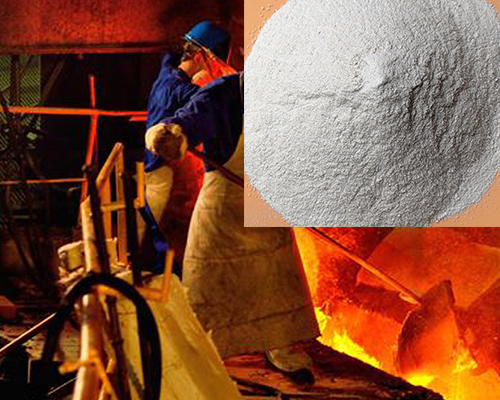 Refining flux is suitable for the recycled aluminum and aluminum alloy degassing and refining, which can effectively remove oxide inclusion and hydrogen from the molten aluminum.

KCI and NaCl are the most common basic components in aluminum alloy fluxes, mainly acting as covering agents. However, adding a small amount of fluoride salt to the chloride salt mixture is mainly used to clear the residue. At the same time, the chloride salt can enhance the ability of the slag cleaning agent to adsorb oxidation inclusions.

Smelting is a key part of the waste aluminum recycling technology, and the quality of the smelting technology is largely determined by the flux and its corresponding treatment process.

The melting process is as follows:

1. First clean the crucible furnace, pouring spoon, bell jar, and the mold of the pouring sample, and then preheat it. After preheating to about 200℃, apply the paint and then dry;
2. When smelting, first add the alloy aluminum ingot, heat it to above the liquidus temperature and melt it completely, and then gradually add the scrap aluminum cake. After adding the waste aluminum cake, when the molten aluminum temperature reaches the smelting temperature of the experimental design, add the Flux for Recycled Aluminum and continuously stir it. When the particle size of the slag is observed to change from large to small to a fine powder, remove it;
3. After slagging, when the temperature of molten aluminum is controlled to about 720℃, add auxiliary refining agent. When there are no air bubbles and slag inclusions float up, quickly remove the slag inclusions;
4. Cast the sample and aluminum ingot immediately after removing the slag. The entire industry has been developing in a more balanced way. Although large-scale recycling companies have become an important source of scrap aluminum, this indicates that the industry concentration is rising.