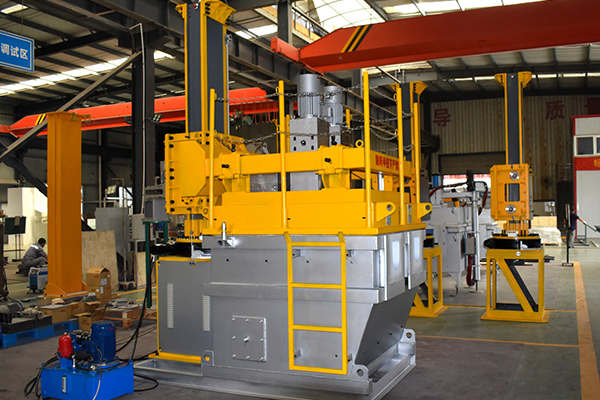 Liquid Aluminum Degassing Device includes a box body, a box cover covering the box body and a rotor. The rotor extends into the box through the bottom of the box. The upper end of the rotor is coaxially connected with the turntable, and the inside of the rotor and the turntable are hollow and communicated. Among them, the shape of the turntable varies from a traditional disc-shaped structure to a streamlined round-head structure.

The experimental verification shows that the bubbles generated by the turntable are small and evenly distributed, which achieves the most effective degassing and slag removal effect.

The material of the turntable is silicon nitride or graphite. The speed of the rotating turntable can be changed by a variable frequency motor, and the speed can be adjusted in the range of 0-900rpm to meet the needs of the process.

The key to degassing of Degassing Equipment is that the rotor can break up the large bubbles of inert gas into small bubbles and make them diffuse throughout the molten metal. Both argon and nitrogen can be used as inert gases to degas molten aluminum. The purity of the inert gas must be above 99.99%.

Liquid Aluminum Degassing Device is to spray inert gas into molten aluminum to remove hydrogen. In addition, degassing is also considered to be a very effective way to float impurities.

Due to the high vapor pressure of hydrogen, the dissolved hydrogen diffuses into the gas in the injected aluminum liquid. Theoretically, when an inclusion with a diameter of 10 microns contacts a bubble, it adsorbs on the bubble and floats to the surface of the liquid.