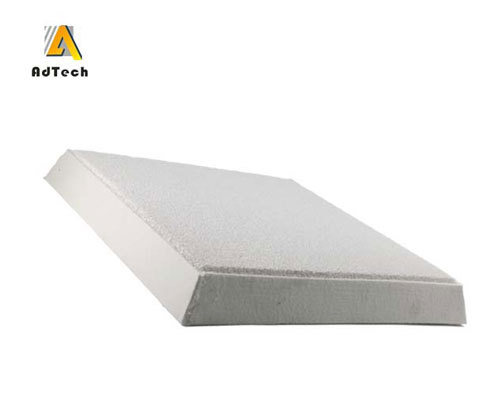 Ceramic Foam Filters for Casting and fluxes are used to remove the inclusions by most aluminum foundries. Liquid aluminum reacts chemically with oxygen, nitrogen, sulfur, carbon, and other elements to produce non-metallic impurities. Among them, oxide inclusions (Al2O3) cause the most serious metal pollution. Generally, the total amount of oxide inclusions in the ingot is 0.002% to 0.02%. The sources of inclusions in the aluminum alloy are as follows:

(1) The oxide formed by the interaction between the surface of the aluminum alloy and the oxidizing gas in the furnace gas, such as Al2O3. This oxide film can protect liquid aluminum from oxidation. However, once the surface film is broken, it will be wrapped in molten aluminum. Because Al2O3 has a high melting point (2050 degrees) and a density (3.5~4.0) higher than that of molten aluminum, it will not float, so it is easy to form oxide inclusions in the casting.

(2) The oxide in the charge is also an important source of oxide inclusions in the alloy. For example, aluminum ingots and intermediate alloys contain inclusions such as Al2O3, and the aluminum rust Al(OH)3 on the surface of the aluminum ingot can directly contaminate molten aluminum during the melting process.

Compared with aluminum, alloy elements such as silicon, zinc, copper, etc., which have a lower affinity for oxygen, are not easily oxidized under the protection of the oxide film. Even if a small amount of elements are oxidized, the obtained oxide is dense and does not damage the continuity of the aluminum oxide film. Therefore, smelting Al-Si, Al-Cu and Al-Zn alloys do not need to add covering agents.