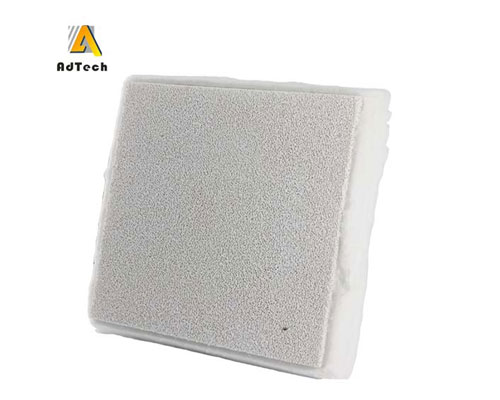 Ceramic Filter Foundry can effectively achieve the purpose of purifying liquid casting alloys. In casting production, the casting reject rate due to casting defects such as non-metallic inclusions is generally as high as 50%-60% of the total number of rejects. Inclusion defects not only seriously reduce the mechanical properties of the castings, but also have a harmful effect on the processing properties and appearance of the liquid casting alloys. Reducing or eliminating various non-metallic inclusions is undoubtedly a very important technical measure to obtain high-quality castings.

Molten Metal Filtration technology has been used in casting production for decades, but at first, simple filters such as wire mesh, perforated steel plates, porous mud cores and other simple filters were inserted into the gating system to filter out large inclusions. Since the early 1960s, two-dimensional structural internal filters such as aluminum silicate fiber, molybdenum silk, and boron nitride fiber have appeared in Russia, the United States, and the United Kingdom, and they have been applied in production.

However, all these filters can only filter out large inclusions and a few small inclusions in the molten metal by mechanical screening, and the aluminum silicate fiber filter can only be used because of its low refractoriness and strength. The filtration of non-ferrous alloys, cast iron and small steel castings is difficult to withstand the impact of high-temperature metal fluids for a long time.

Although the molybdenum wire developed in the United Kingdom and the boron nitride fibrous filter developed in the United States can be used to filter high-temperature alloys such as cast steel, their application is limited due to their high price. Also used for casting alloy filtration are straight-hole core ceramic filters and refractory particle filters.

The foam ceramic filter produced by AdTech, which is resistant to corrosion by molten aluminum, has good high temperature stability and corrosion resistance, high flow rate of molten metal, and good filtering effect. We have two models of alumina ceramic foam filter and zirconia ceramic foam filter. The filter sizes are 20PPI, 30PPI, 50PPI, 60PPI, etc., which can be used for the production of high-quality castings in automobiles, aerospace, and military industries, and improve the performance of related enterprises productivity.