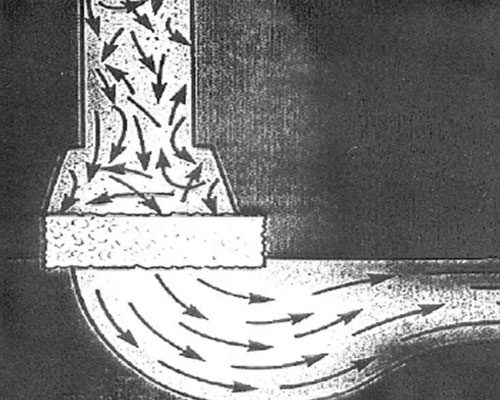 One is interception and blocking. Generally, large inclusions are easily captured by the filter inlet. With the passage of a certain amount of metal melt, a filter cake will be formed on the surface of the filter inlet, and the flow rate of the melt through the ceramic filter will be significantly reduced thereafter. At the same time, as the inner diameter of the inlet decreases, the probability of interception of smaller-sized inclusions increases, and the removal efficiency of small-sized inclusions increases.

The third is the rectification effect. The rectifying ability of the ceramic filter system makes the molten metal, which originally has a strong turbulent flow, in a laminar flow state when flowing through the filter. After flowing through the filter, to restore the original turbulent state, a longer transition zone is required. In the transition zone, the liquid flow has not yet developed into a stable turbulent state or in a smaller turbulent flow zone, which avoids the secondary oxidation of the molten metal and the erosion of the mold, thus playing an obvious slag blocking effect. That is why the metal mesh and the core filter also have a better effect of purifying metal. (1) No purification medium: inclusions can be removed by their own movement.

(3) The melt is moving and the purification medium is static: such as the filtration method, the flow of the melt shortens the distance required for the mass transfer process and improves the efficiency of impurity removal.