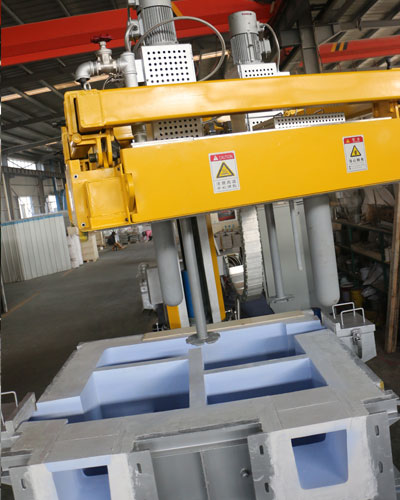 Degassing equipment is located on the line between the furnace and the casting station, and its role is to remove impurities contained in the molten aluminum and its alloys that affect its quality and mechanical properties. It has the dual functions of processing and heating. The selected treatment process is based on the principle of gas flotation, in which process gas is injected and evenly dispersed, and tiny bubbles flow upward into the melt. Hydrogen is absorbed into the bubble and eliminated. The alkali metal reacts chemically with the chlorine gas, and the inclusions are excluded from being trapped by the bubble. Large ones collide and small ones are intercepted in a straight line. Then rise to the surface of the melt to form dross. Gas flow is an important parameter for degassing hydrogen from aluminum melt. To achieve a certain hydrogen removal effect in a molten pool with a capacity of about 60t, there must be sufficient gas injection speed. The greater the gas flow, the higher the efficiency of hydrogen removal. However, the airflow cannot be increased unlimitedly, and the air supply can be adjusted within 1.5-6.5m^3/h. If the airflow is too large, there are too many bubbles in the reaction chamber. Relatively speaking, the amount of molten aluminum to be processed becomes gas, and the time for liquid contact is shortened. At the same time, when the airflow is too large, the upper and lower convection of the aluminum liquid is intensified, causing the bubbles to be in the aluminum melt. The staying time in the body is greatly shortened, thereby reducing the effect of hydrogen removal.