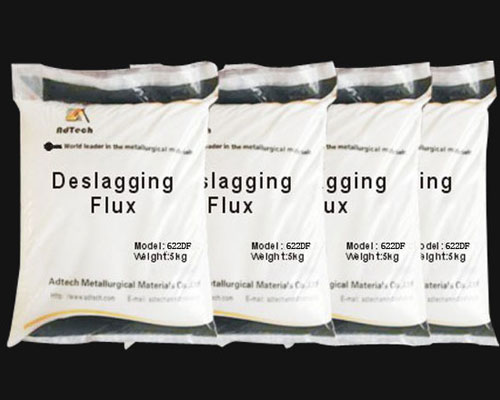 In order to remove alkali metal elements (ie, Na, Ca, K, Li), the flux for alkali metal removal is a recognized method for processing molten aluminum. Under equilibrium conditions, the chlorides of each of these elements are produced as reaction products. Except for LiCl, all these halide salts are pure species and are solid at normal processing temperature, so they can be easily separated on the surface of the melt as a supernatant and removed by skimming.

Alkali metal elements are usually present in melt concentrations below 500 ppm. According to the law of mass action (the reaction rate is approximately proportional to the concentration of the reactant), non-equilibrium metastable salts are formed, such as AlCl 3 and MgCl 2 (if Mg is present). These halides are undesirable because they greatly affect the airborne transmission in the process. In addition, MgCl 2 melts at 1306°F and usually melts at normal melt processing temperatures. Melting is very undesirable because it is difficult to remove the skimming salt on the surface. Therefore, it is highly desirable to react or complex alkali elements to produce a higher melting point salt, which is more effectively separated into a solid form by flotation to the surface.

In dispersing the flux gas in the aluminum melt, the flux for alkali metal removal is introduced into the main body downward along the axial direction, and dispersed by the rotating impeller installed on the shaft. However, this method is not unlimited. The rotating impeller produces a vortex around the shaft, which indicates that most of the molten metal rotates or circulates around the impeller shaft at a rate close to the speed of the impeller. Fusion of molten metal added to the culture medium tends to circulate and melt metals with only minimal dispersibility. In addition, the vortex has the effect of increasing the surface area of ​​the melt exposed to air.

The increased exposure of molten metal to the air leads to increased slag formation, subsequent entrainment and its harmful side effects. When the flux is a gas, the vortex can cause problems in another way. The flux gas is separated by physical force toward the center of the vortex, with the result that the other parts are displaced and the melt does not adequately process the fusion gas. Therefore, the effectiveness of the method is reduced due to partial melt. Do not use flux to treat the body. In addition, the flux gas entrained in the molten metal flow pattern tends to coalesce, resulting in the formation of larger flux gas bubbles in the melt. Larger bubbles will reduce the efficiency of the flux, because less molten metal is processed. Therefore, there is an urgent need for a more effective flux process, which can suppress the absorption of slag from the surface back into the melt through the formation of vortex, for example, make the flux material finely dispersed in the entire melt, and enhance the molten metal contact with flux for alkali metal removal, can improve the flux of the melt.