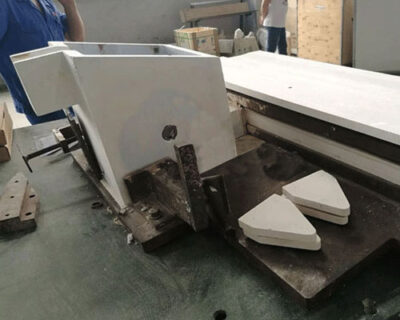 The influence of the gap between the nozzle cavity and the roller in aluminum strip casting and rolling process.

Part of the nozzle skin will be ground to the roller surface. When the plate is discharged, it will be subjected to a certain rolling force, which makes the slag is partially dropped from the feeding nozzle, causing the local melt to first contact the casting roll surface and crystallize earlier than other places, forming a kind of condensing shell and causing volume shrinkage. The melt under the condensing shell has no resistance during rolling. The condensed hard shell forms a gap with the casting roll surface (separating the liquid metal from the casting roll surface), which prevents the normal heat dissipation. The high-temperature melt in the liquid cavity will condense the shell. Heating, the interdendritic eutectic structure can be heated above the melting point to become liquid. Under the action of the front box static pressure, the high-component melt can seep out of the surface of the condensed shell and condense into point defects. These points are reflected in the casting and rolling the surface of the plate is the band-shaped defect formed on the cast-rolled surface, that is, the structure stripes. In severe cases, defects such as cleaning rods and aluminum sticking will occur. Appropriately increasing the gap between the nozzle and the roller can significantly reduce the phenomenon of nozzle powder, dust, and aluminum burr being embedded in the nozzle skin. After the nozzle is heated and expanded, there will be a certain gap with the roller surface. The plate does not touch the roller surface. When the force is applied, slag drop or damage will not occur, thereby reducing the structure and longitudinal stripes on the surface of the cast-rolled strip.

If the gap between the nozzle cavity and roller is too large, the oxide film formed on the surface of the casting nozzle and the roll will hardly be “wrapped” in the molten aluminum and rupture, which will cause the aluminum to return to the vertical plate and make the vertical plate fail.