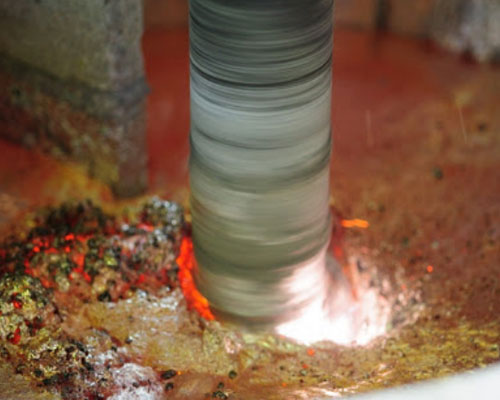 2) The purity of the inert gas. The purity of the inert gas mainly refers to the degree of oxygen and moisture in the inert gas. The higher the oxygen and water content in the inert gas, the worse the refining effect. Because oxygen and water vapor enter the melt with the refined gas, they will chemically react with the melt to form an oxide film on the surface of the bubble and increase the hydrogen partial pressure in the bubble. This will not only greatly delay the diffusion and hydrogen removal process, but also And increase the content of oxidized inclusions in the solution. When the moisture and oxygen in the inert gas exceed a certain value, not only can it not play a refining role, but even cause the melt to undergo a hydrogen absorption process, causing more serious pollution.

3) The size of the bubbles. The smaller the bubble size, the better the degassing effect. Because the smaller the bubbles, the more bubbles caused by the same volume of gas, and the larger the surface area; and the slower the floating speed in the aluminum melt, the longer the contact time with the melt.

4) The uniformity of the contact between the bubbles and the melt. The fuller and more uniform the contact, the better the refining effect. Because air blowing refining is based on partial pressure difference diffusion degassing and flotation slag removal, only the area in contact with the refined gas can have a refining effect. In order to increase the chance of contact, it is best to use the combined treatment of on-line transfer refining and filtering and blowing, so that each part of the melt is subjected to refining. In the case of refining in the furnace, the refining device should be moved gently along the bottom of the furnace to prevent dead corners.