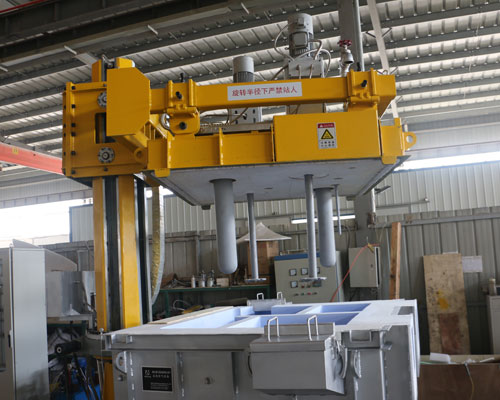 The rotating degassing box impeller works by increasing the surface area of ​​the inert gas introduced into the metal. The smaller nitrogen bubbles produced by the impeller process have a larger total surface area and collect more hydrogen. The lower surface disturbance of the smaller bubbles also allows less hydrogen to be recaptured into the metal from atmospheric moisture.

Considering the light weight of aluminum, aluminum is a metal that is often used for its relative strength. However, when casting aluminum, impurities called inclusions can create weak points in the product. There are many reasons for these inclusions, but they are most common in the presence of hydrogen. Hydrogen is soluble in liquid aluminum, and it can pass through molten aluminum almost as easily as air. As the liquid metal cools and hardens, hydrogen flows from the high pressure area to the low pressure area. It coalesces and produces gas, which becomes inclusions and weak points when the metal solidifies. Degassing with nitrogen is a process used to remove hydrogen from molten aluminum.

As the demand for high-quality aluminum products increases, especially in the aerospace industry, the need to reduce inclusions in molded products also increases. A popular method of removing hydrogen involves introducing blown nitrogen into liquid aluminum. The hydrogen is attracted to the nitrogen bubbles, then absorbed by the aluminum and released to the surface. Argon gas is also very effective, but due to the high cost associated with this gas, nitrogen is preferred. AdTech provides a rotating degassing box for degassing and purifying large amounts of molten metal in an economical and effective manner, eliminating the harmful effects of gases and insoluble oxides in aluminum and its alloys. Degas the metal so as not to damage its solid casting quality or physical properties. Eliminate voids in the casting due to gas release.