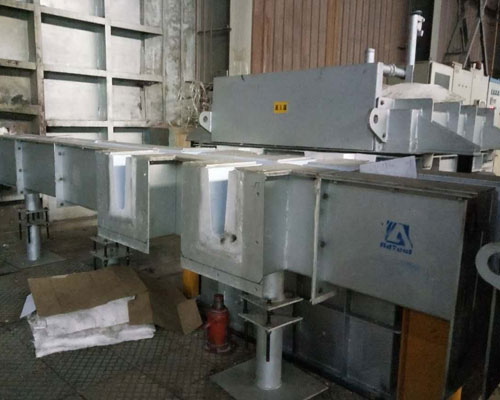 The secondary pollution of the aluminum melt mainly occurs in the insulating launder from the furnace to the casting machine. On-line degassing and filtering devices are installed on the insulating launder for purifying the aluminum melt. When the melt passes through the trough system, it will absorb hydrogen to varying degrees when it contacts the moisture in the air. When the aluminum melt contacts moisture, the atomic hydrogen is absorbed by the surface of the aluminum liquid and then diffuses into the melt. The entire dissolution process includes: physical adsorption, chemical adsorption, diffusion.

According to the characteristics of the hydrogen absorption of the metal transfer runner, a comparative test of two runners has been done: one is for the production of a common open runner, where the aluminum melt is in direct contact with the environment, and the melt protection only depends on the oxide film on the surface. The other is an improved runner, which is improved on the basis of an open runner. The depth of the runner remains unchanged. The upper mouth of the runner is reduced by 4cm, and the width of the lower bottom is reduced by 2cm. In addition, heat preservation treatment is performed on the runner. After the casting material is formed and installed, the heat preservation material is added to the outside of the package. The purpose is to reduce the heat dissipation of the runner and reduce the contact between the melt and the air, so as to reduce the temperature of the aluminum melt and the hydrogen absorption capacity. Compared with the open runner, the improved runner has a smaller cross-sectional area, the melt flows faster in the runner, and the residence time is shorter. The sealed flow channel isolates the melt from the moisture in the air, effectively prevents the production of high-temperature aluminum and moisture reactants, reduces the hydrogen concentration at the vapor-liquid interface of the aluminum liquid, and effectively prevents the melt from absorbing hydrogen. After improving the runner, the residence time of the melt in the runner is shortened, the system temperature and the hydrogen concentration at the aluminum liquid gas-liquid interface are reduced, and the goal of reducing the hydrogen content at the casting point is achieved.

In actual production, the secondary pollution of aluminum melt needs to be controlled from the outlet of the degassing unit to the casting point. Effective ways to control: First, speed up the flow rate of the melt in the runner and filter box. The second is to reduce the contact area between molten aluminum and air. The third is to reduce the humidity in the air. Take the filter box as an example, a filter box with strong sealing should be used and the residence time of the aluminum melt in the box should be reduced. Especially when the hydrogen content of the melt is low, the sealing effect is required to be higher, otherwise the effect of the on-line degassing treatment will be reduced by the subsequent secondary pollution, and the ideal aluminum melt will not be obtained in the end.